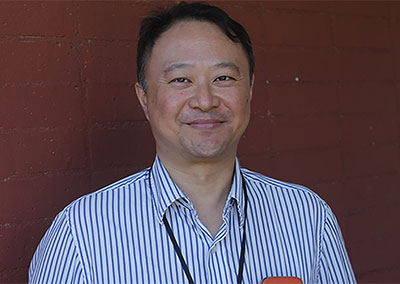 Mr. George Chung Che Yick was born in 1966 and educated in one of the last British colonies of Hong Kong. He spent a total of eleven years of catholic education at La Salle Primary School and La Salle College in Hong Kong. At the age of seventeen, he went to Toronto, Canada and finished his secondary education. From then on, he resided in North America. After finishing his Bachelor Degree in Applied Mathematics in University of California, Irvine in 1989, he joined AeroVironment Inc., at Pasadena as an associate scientist in the air quality engineering department. In 1994, he received his Master of Science degree in Mechanical Engineering from California State University, Los Angeles. In the same year, he co-founded E-Tech Environmental and worked as a project engineer for three and half years. In 1997, he started working at Cleveland High School as a mathematics teacher. In 2002, he received his Master of Arts degree in Secondary Mathematics Education from California State University, Northridge. For the past seventeen years at Cleveland, Mr. Yick have been teaching all level of mathematics classes, including Math Tutorial, Algebra 1, Geometry, Algebra 2, Math Analysis (Pre-Calculus), AP Calculus AB and BC.