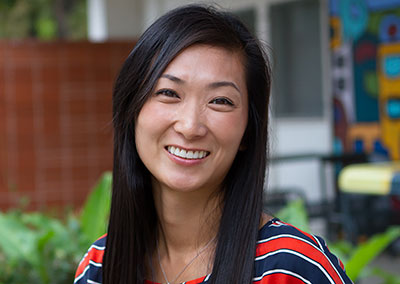 Grace Eunhae Kim Oh grew up in the San Fernando Valley. She attended UC Irvine as an undergraduate on a full scholarship in 1999, where she majored in History and minored in English and Education. Upon graduation, Mrs. Oh attended graduate school at UCLA where she received a Masters in Education and a Teaching Credential for social studies. Her first teaching position was at Manual Arts High School in Los Angeles for one year. She then moved on to Leuzinger High School in Inglewood, where she taught for three years. It was during this time, she met her husband at a church function. After seven years of marriage, Mrs. Oh has extended her family with two handsome little boys and a beautiful little girl. In 2005 she decided to also pursue an administrative credential and was accepted into the UCLA Principal Leadership Program where she received a second Master’s degree. It was there she met Mr. Lemmon, the former magnet coordinator and became interested in Cleveland Humanities Magnet. The rest is history!