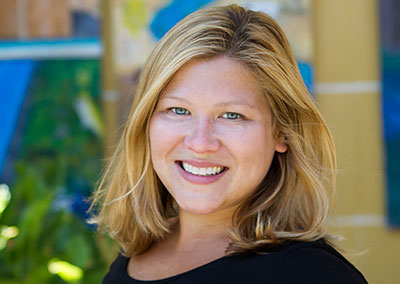 Rebecca Williams began her career at Cleveland as a shy ninth grader in the Fall of 1996. Thanks to the Humanities Magnet, she quickly found her voice and hasn’t stopped talking since! While a student at Cleveland, Rebecca participated in Drama and Speech and Debate, receiving both state and national recognition. After a successful four years at Cleveland, she left the San Fernando Valley for the sun and surf of UC Santa Barbara. While at UCSB, she majored in English and volunteered at the university preschool and local area middle and high schools. This experience, combined with her love of the teachers at Cleveland, solidified her future career path in education.

After graduating a year early from UCSB in 2003, Rebecca came back to Los Angeles to earn her teaching credential and master’s degree at UCLA’s Graduate School of Education. She then spent two years teaching middle school English in South Los Angeles until she got a call one day from her former teacher, Ms. Melanie Miller. Melanie informed her of an opening at Cleveland, and after a scary interview process involving Mr. Linn watching her teach a lesson, she got the job!

In 2011, Rebecca returned to graduate school to purse her doctorate at USC, which she finished in 2014. Now, in addition to coordinating the 12th grade and teaching on the 11th grade team, Rebecca also teaches as an adjunct professor at night for USC’s Rossier School of Education. For Rebecca, Cleveland is home, and she is excited to continue the growth and success of the Magnet Program