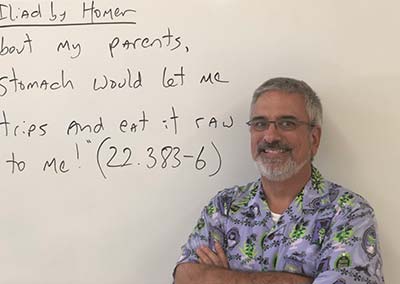 The “odyssey” that led Richard Posito to become part of the team here at Cleveland’s Humanities Magnet is very interesting, albeit a tad unorthodox. A valley boy himself, Mr. Posito attended Francis Polytechnic High in the early 80’s, graduating with a GPA close to a 2.0 (it was probably a bit lower than that, but let’s not go into that). After graduation, and a wide variety of jobs over the span of five years, he enlisted in the United States Navy right before his 22nd birthday. He was trained as an aircraft mechanic in Memphis, working on ejection seats and oxygen systems on the A-6 Intruder near Seattle for two years and the E-2 Hawkeye in San Diego for three. While in San Diego, he enrolled at Miramar College. There, in an “Introduction to Literature” class, he read the poem To An Athlete Dying Young by A.E. Housman. To his utter amazement, he felt as though he completely understood that poem. He was asked to discuss the poem with the rest of the class, and it was at that moment that he felt the “calling” to become a literature teacher. After the Navy, Mr. Posito enrolled in California State University, Northridge where he majored in Renaissance Literature, with an emphasis on the works of William Shakespeare, John Milton, and Christopher Marlowe. Upon receiving his degree, he entered LAUSD’s District Intern Program and was hired in 1995 at Sepulveda Middle School. He taught seventh and eighth graders there for seven years when he got the call from Mr. Anstead to become part of the team here at Cleveland. When asked about teaching in the CORE program, he says, “I love the curriculum that I am able to share with the tenth and twelfth graders. I truly hope that my passion and enthusiasm gets the students interested and excited about these literary works.” Mr. Posito has also been taking students on European excursions since 2008. He organizes trips every other summer (even years) and takes students who have completed either eleventh of twelfth grade at the time of departure. It’s a phenomenal experience for both students and chaperones!