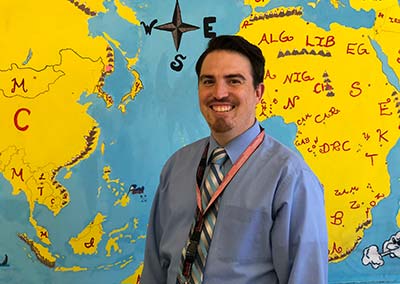 Victor Silva has been teaching at the Cleveland Humanities Magnet since 2018 and is very proud to be a Core alum. After graduating Cleveland in 2000, he attended Arizona State University where he competed for the ASU speech team. During his time at ASU, Mr. Silva’s speech teams finished in the top four in the United States three times and Mr. Silva was the national runner up in Extemporaneous Speaking. After graduation, Mr. Silva taught history, English, and American Studies at Desert Vista High School. In 2010, he was named Desert Vista’s Teacher of the Year. While at Desert Vista, Mr. Silva coached baseball and speech and debate. Mr. Silva helped lead the speech and debate team to fifteen appearances at the National Speech and Debate Association’s National Championship Tournament, where his teams earned ten team awards including winning the 2015 National Championship.

From 2006 to 2013, Mr. Silva worked summers at the University of Texas at Austin, where he taught high school students, lecturing on issues such as international relations, economics, government, political science and education policy. From 2008 to 2016, Mr. SiIva provided television coverage of the Presidential debates for Fox 10 Phoenix.

Cleveland is a very special place for Mr. Silva as it is the place where he developed into the student/person that he is today, honed his academic skills, and met his wife. During his free time, Mr. Silva enjoys spending time with his wife and two children, attending Dodger games, and watching sporting events of all kinds. An avid soccer fan, Mr. Silva is a member of the American Outlaws, a supporters group for the United States men’s and women’s national soccer teams.