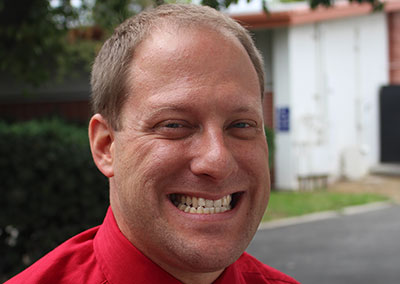 Travis Aranaga was born and raised in Miami, Florida, where it was just as likely to find an alligator in a pool than to tan on the famed white sand beaches the city is known for. After graduation, Mr. Aranaga attended the University of Florida in Gainesville — Go Gators! At UF he received his Bachelor’s in History, Master in Secondary Education, and Master of Science in Management. While in college, Mr. Aranaga married his high school sweetheart, Jessica, also a UF alum. After graduation, they moved to Los Angeles, where they both pursued jobs in their respective fields.

His first teaching position was at James Monroe High School, where he taught tenth through twelfth graders for six years. Throughout the years, he has taught and sponsored a variety of clubs and organizations, ranging from yearbook adviser to Academic Decathlon coach. After finding a passion for math instruction and gaining a math credential later in his career, Mr. Aranaga went to Virtual Program (now iGranada) at Granada Hills Charter High School as an Academic Advisor and worked at the Social Justice Humanities Academy before returning to the Humanities Magnet at Cleveland High School. He’s thrilled to be part of such a spectacular team of educators and work with such fantastic students.

And now for some fun facts. He always roots for his Gators – in all kinds of weather! He loves spending time with his daughter – a future Gator in training. He picks up new and interesting — and often obscure — information everywhere he goes, but puts it to good use as he always finds a way to connect it in meaningful ways for his friends, family, and students whether from his “useless” fact of the day or an unusual tie in to the subject matter. One thing is for sure: he consistently strives to teach each of his students to find a passion, question everything, endure through challenges and try to find new things to be amazed by.