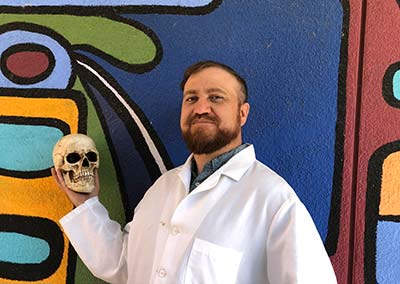 Vincenzo Loconte grew up in Orange County. He escaped to the Bay Area after graduation then attended UC Santa Cruz where he majored in psychology. After receiving his degree he hung around in Santa Cruz for a few more years where he made pizza and worked in special education. In his time in Santa Cruz he also produced and hosted a science radio show for KZSC. He moved to Los Angeles in 2010 where he continued to work in special education, helped operate a bicycle coop and in 2013 joined a teaching credential program at CSU Dominguez Hills.

2014 was a big year for Mr. Loconte. He got married and joined the Cleveland Humanities Magnet 9th grade team as a university intern. He has been teaching Environmental Science and Biology there ever since. Mr. Loconte also acts as faculty advisor for several clubs including Heal the Bay, TreePeople, and the Green Team student environmental advisory council.

Mr. Loconte spends his free time hiking, camping, or traveling the world by bicycle. He continues to teach people how to repair bicycles and helps organize global conferences on bicycle advocacy.