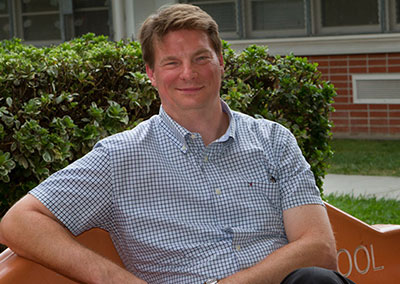 Wayne Basinger has been teaching at Cleveland High School for eleven years. Before joining the magnet program, he worked with students with special needs in the Special Day and Resource programs. Mr. Basinger holds a master’s degree in Communication Studies with an emphasis in Rhetoric from Wayne State University in Detroit, MI. Mr. Basinger’s undergraduate degree is in Political Science with a minor in Communication Studies. During his undergraduate years, Mr. Basinger actively competed on his university’s debate team. At Southern Illinois University, he was part of a national champion debate program. At the University of North Dakota, he was ranked as one of the top ten debaters in the nation in CEDA (value-based) debate. Before entering the education field, Mr. Basinger worked as a Human Resources consultant for a variety of companies, including: Coca-Cola, IBM, General Motors, Prudential Healthcare, and Cedars-Sinai Medical Center. Mr. Basinger’s wife Jill is a Corebaby from the class of 1989. She is a partner at Glaser, Weil LLP. His two children, Nicholas and Amanda, will follow in their mother’s footsteps and be Corebabies as well.

Some Fun Projects from Art History